Zayed Abbas Khan (born 5 July 1980) is an Indian actor and producer who appears in Hindi films. He has received a Filmfare Award nomination and is the son of Bollywood actor Sanjay Khan.

In 2011, the actor ventured into production with his co-owned production house, Born Free Entertainment along with friend and actress Dia Mirza and her spouse Sahil Sanga with their first film, Love Breakups Zindagi. In 2017, Khan made his television debut in the show Haasil. He is married to Malaika Parekh since 2005 with whom he has two children. 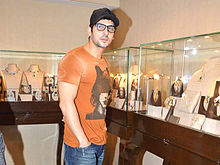 Zayed Khan at a Jewellery shop.

Khan’s parents are former Bollywood actor Sanjay Khan and interior designer Zarine Khan. Zayed, who was raised as a Muslim, is the youngest of four children and the only son of his parents. His elder sisters are Simone Khan (married to Ajay Arora), Suzanne Roshan (ex-wife of actor Hrithik Roshan), and Farah Khan Ali (married to DJ Aqeel). Khan is the nephew of late actor Feroz Khan and director Akbar Khan (brothers of Sanjay Khan) and first cousin of Bollywood actor, Fardeen Khan. 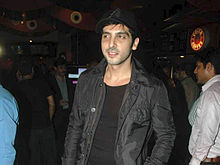 Zayed Khan at the premiere of Mod.

Khan made his screen debut in 2003 in the film Chura Liyaa Hai Tumne.

In 2004, he starred in Main Hoon Na, which was one of the biggest hits in his career. It was the second highest-grossing film of 2004 behind Veer-Zaara and was declared a hit. Khan was subsequently nominated for the Filmfare Award for Best Supporting Actor in 2005. He also starred alongside Amrita Arora in a music video called Disco 82 Remix by DJ Aqeel for UMI-10.

Khan had 4 releases in 2005. He played an obsessive lover in Vaada alongside Arjun Rampal and Ameesha Patel. He then starred in Shabd as a photography professor, which he was very excited about because he had always wanted to do a film with Aishwarya Rai. His third release, Anubhav Sinha’s action thriller Dus, where he played a cop, did well. It was an above-average grosser and was the third highest-grossing film of 2005. Khan’s final release of the year, Shaadi No. 1, flopped at the box office.

He starred in Sohail Khan’s action multi-starrer, Fight Club – Members Only in 2006. Next, he appeared in Rocky: The Rebel. Khan revealed that he had ghost-written some scenes in the film. He had first begun script-writing when he was studying in London.

Both of his films in 2007 were action multi-starrers. Anubhav Sinha’s Cash was originally meant to be the sequel to Dus, but ended up differently. Due to this, some of the cast of Dus also star in Cash. It performed reasonably well in its first week, but was unable to replicate the success of Dus and was eventually declared a flop. His next film, Speed, also failed at the box office.

In 2008, Khan had the leading role as a news reporter in Apoorva Lakhia’s Mission Istaanbul opposite Vivek Oberoi. He also starred in the Bollywood remake of Rain Man, Yuvvraaj with Salman Khan, Katrina Kaif and Anil Kapoor.

The following year, he featured in the underwater action thriller Blue. At the time of its release, the film broke the record for having the highest budget for a Bollywood film. It had an excellent opening weekend on Diwali, collecting ₹480 million, but was a below-average grosser. He also filmed Sharafat Gayi Tel Lene, a comedy thriller film. However, it ran into production hassles and is yet to be released.

Khan had a special appearance as an unfaithful fiancé in the 2010 Ranbir Kapoor–Priyanka Chopra starrer, Anjaana Anjaani.

In 2011, the actor ventured into production with his co-owned production house, Born Free Entertainment along with friend and actress Dia Mirza and her husband, Sahil Sanga. Their first film, Love Breakups Zindagi, was released on 7 October 2011, and was met with a lukewarm response.

In 2012, Khan played a supporting role in Tezz, which stars Anil Kapoor and Ajay Devgan in the lead. His next film, Ameesha Patel’s maiden production, Desi Magic, was slated to release on 28 February 2015.

In August 2017, Khan made his television debut on a show called Haasil playing the lead role of Ranvir Raichand opposite Vatsal Sheth and Nikita Dutta. The show premiered on October 2017.

According to reports in the media, Khan was driving a Mercedes when he hit a woman riding a scooter. The reports quoted eyewitnesses as saying that Zayed Khan was driving the vehicle but he quickly switched places with a passenger in his car when the accident happened. The media claimed that by the time the police arrived, there was confusion about who was actually driving the car. The reports also added that Khan and the group he was traveling with were prompt in taking the injured woman to a local hospital for treatment. 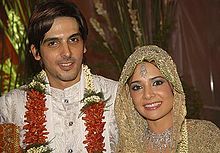 Zayed Khan and Malaika Parekh at their wedding on 20 November 2005.

Khan married his high school sweetheart Malaika Parekh on 20 November 2005. In an interview, Malaika stated that Zayed proposed four times to Malaika and she has four rings from him.They both studied in Kodaikanal International School and became acquainted with each other in 1995.

Malaika Parekh born on 23 August 1980 in Mumbai, Maharashtra, India. Her mother, Chris Parekh, is English. Malaika is trained in the gems and jewellery business as her late father Rohit Parekh, a diamond merchant, was in the same trade.

In September 2007, Malaika and Zayed announced that they were expecting their first child. The couple had a baby boy, Zidaan, born 18 January 2008, and a second son, Aariz, born 22 September 2011.

In 2008, Khan gave up smoking in honour of his first son.