Xavier Hernández Creus (born 25 January 1980) is a Spanish professional footballer who plays as a central midfielder for Qatari club Al Sadd SC. He is known for playing for the Spain national teamand Barcelona.

Xavi came through La Masia, the Barcelona youth academy, at age 11 and made his first-team debut against Mallorca in August 1998. Since then, he has played 700 matches, scored 82 goals and made more than 180 assists for over 50 players. Xavi is the first player in Barcelona’s history to play 150 international matches. Highly regarded for his humble persona and team ethos, Xavi is viewed as being the embodiment of the tiki-taka passing style of play, and is widely considered to be one of the greatest central midfielders of all time.He is also considered by many to be the greatest Spanish player ever.

Xavi won the U-20 World Cup for Spain in 1999, and the Olympic Silver Medal at the 2000 Olympics. Since making his senior team debut in 2000, he has been capped 133 times for the Spain national team, and has been seen as an influential figure in the team’s tremendous success. He played an integral role in Spain’s victory at the 2010 World Cup, as well as their successes at both Euro 2008and Euro 2012. He had a 91% passing success rate at the 2010 World Cup and was named in the World Cup All-Star Team. He was named Player of the Tournament by UEFA at Euro 2008.He was also named in the UEFA Euro Team of the Tournament in 2008 as well as 2012. After the 2014 World Cup, Xavi announced his retirement from international football.

“I’ve been lucky enough to be brought up on the Barcelona ethos. Which has taught me the value of being part of a team. ‘Today for you, tomorrow for me.’ Those qualities are essential for life in general.”

—Xavi on learning the team ethos of Barcelona while at the club’s youth system, La Masia.

Born in Terrassa, Barcelona, Catalonia,Xavi is a product of FC Barcelona’s La Masia youth system, which he joined at the age of 11. His father, Joaquim, was a former player for Sabadell in the first division.Xavi made his way through the youth and reserve teams and was a key member of Josep Maria Gonzalvo’s Barcelona B team that won promotion to the Second Division.

“I think I haven’t changed at all to what I am now. I’ve been a passer since a young age. I liked passing with the rest of the players and my friends when we played football on the streets, in the main square, and at school. I think I was very similar to what people see in the stadium.”

The claim that Xavi is one of the best central midfielders of all-time relies largely on his ability to find and exploit space as a playmaker. As he said, “That’s what I do: look for spaces. All day. I’m always looking.”Finding space, he would appear for a teammate to receive and then move the ball on, with his coach Pep Guardiola putting it. “I get the ball, I give the ball, I get the ball, I give the ball.”Xavi’s signature move when in possession is performing a 360 degree turn, known as la pelopina, that allowed him to move away from the opposing player, giving him space and time to think about his next pass.

Xavi’s vision, pinpoint accurate passing and world-class ball control allowed him to dictate the flow of play while rarely relinquishing possession, most notably displayed during Spain’s 2010 World Cup victory where he had a 91% passing success rate for the tournament.His ability to control some matches has earned him the sobriquet, “The Puppet Master“.A style introduced to the club by former coach Johan Cruyff, Barcelona president Sandro Rosell believed Xavi, together with Lionel Messi, Andrés Iniesta and Sergio Busquets, perfected the club’s tiki-taka style of play.

Xavi has a sponsorship deal with German sportswear and equipment supplier Adidas and has appeared in Adidas commercials alongside Lionel Messi, Luis Suárez and Robin van Persie. Xavi features in EA Sports’ FIFA video game series, and was the top passer in FIFA 15 with a 91 rating.

In November 2014, Xavi appeared in FIFA’s “11 against Ebola” campaign with a selection of top football players from around the world, including Cristiano Ronaldo, Neymar, Gareth Bale and Didier Drogba. Under the slogan “Together, we can beat Ebola”, FIFA’s campaign was done in conjunction with the Confederation of African Football (CAF) and health experts, with the players holding up 11 messages to raise awareness of the disease and ways to combat it.

Since July 2013, Xavi has been married to Nuria Cunillera. Their daughter, Asia, was born on 3 January 2016. 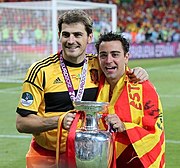 Xavi and Spain captain Iker Casillas with the Euro 2012 trophy