Thiago Emiliano da Silva (born 22 September 1984), commonly known as Thiago Silva, is a Brazilian professional footballer who plays as a central defender for and captains both Paris Saint-Germainand the Brazil national team.

After moving to Europe to join Milan in 2009, Silva established himself as one of the highest rated defenders in the world, winning the Serie A title with the Rossoneri in the 2010–11 season. In July 2012, Paris Saint-Germain signed him for a reported €42 million, making him then the second-most expensive defender in history behind Rio Ferdinand. With PSG, Silva has won four consecutive Ligue 1 championships, five consecutive Coupes de la Ligue and three consecutive Coupe de France.

A full international since 2008 and a non-playing member of their team at the 2010 FIFA World Cup, Silva captained Brazil to victory at the 2013 FIFA Confederations Cup and fourth place at the World Cup a year later, both on home soil. He was also part of their squads for the two Olympic tournaments – winning a bronze in 2008 and silver four years later – and as many Copa América editions, earning over 70 caps in all. 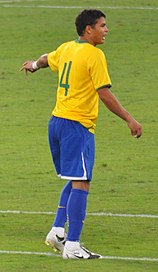 Thiago Silva playing for Brazil in a friendly against England, on 14 November 2009.

Thiago Silva in a friendly against Scotland, on 27 March 2011.

After a strong season with Fluminense, Silva was called up to the Brazil preliminary squad for the 2007 Copa América,though he was not a part of the main team which ultimately won the tournament. Silva was then called up for a friendly against Algeria on 15 August, failing to leave the bench, as Brazil won 2–0. Silva was then selected by Dunga to play in the 2008 Summer Olympics, one of two overage players, alongside Ronaldinho. Silva won his first two caps for Brazil in pre-Olympic friendlies against Singapore and Vietnam, though he suffered a right calf injury against Vietnam that kept him out of Brazil’s first Olympic match. He was finally pronounced fit for the third group match, where Silva started and Brazil won 3–0 against China. He did not start any other matches, only coming on in the 71st minute against Belgium in the third-place match, which sealed the bronze medal for Brazil.

Silva’s next cap came in an international friendly against Portugal on 20 November 2008; Brazil won by a convincing 6–2 scoreline, and Silva was praised for having “dominated” the reigning FIFA World Player of the Year, Cristiano Ronaldo.Silva was praised by his teammates for his performance.He was not a starter during the 2010 FIFA World Cup cycle for Brazil, despite his high level of club performances for Milan. He was still playing in friendly matches, and in a November 2009 friendly against England, Silva put in a man of the match display in Doha.

Silva was an unused substitute in all matches at the 2010 World Cup, where Brazil were defeated in the quarter-finals by the eventual finalists, the Netherlands.Silva was selected as captain by new Brazil coach Mano Menezes ahead of the 2014 World Cup qualifying cycle, replacing Lúcio. Brazil disappointed at the 2011 Copa América, losing in a penalty shootout to Paraguay, where every Brazilian player — Fred, André Santos, Elano and Silva — failed to convert their penalties in shocking fashion. Silva scored his first goal for Brazil in an friendly match against the United States. International honours still eluded Silva at the 2012 Summer Olympics, as Mexicosurprised Brazil in the final to win 2–1.

Silva scored his second goal for Brazil in a 3–1 friendly victory over Portugal on 11 September 2013.In a pre-World Cup friendly against Serbia, Silva assisted Fred’s goal as Brazil ran out with a 1–0 victory.

Silva has been recognized as a complete defender by his peers and critics. He has been described as a consistent defender, without any flaws, and someone who can lead any defence.A leader from the back, Silva’s play has led him to be compared to legendary Italian defender Franco Baresi. Baresi, regarded as one of the greatest defenders in football history,has gone on record to state that Silva is the defender who most resembles him, and said in June 2012 that Silva was his “heir”. His leadership skills are also apparent through his success in captaining Brazil and Paris Saint-Germain.

Silva is heralded as one of the fastest defenders in European football, and has been described as a strong defender with good aerial ability. He combines these physical gifts with a phenomenal tactical intelligence and knowledge of the game, as well as an excellent positional sense.Thanks to his abilities, he excels at reading and anticipating plays and is excellent at closing down opposing players in possession of the ball. Hailed as the best of the new breed of defenders— composed in possession, able to create chances for his team from the back — Silva is a defender who is universally praised, being voted as one of the top two central defenders in Europe for three consecutive years.

Silva and his wife Isabele have two sons named Isago and Iago.Silva is a Christian.