Luís Filipe Madeira Caeiro Figo OIH (born 4 November 1972) is a retired Portuguese professional footballer who played as a midfielder for Sporting CP, Barcelona, Real Madrid and Inter Milan before retiring on 31 May 2009. He won 127 caps for the Portugal national team, a record at the time but later broken by Cristiano Ronaldo.

Renowned for his creativity and ability to get past defenders as a winger, Figo is regarded as one of the greatest players of his generation. His 106 assists are the second-most in La Liga history, behind Lionel Messi. He won the 2000 Ballon d’Or, 2001 FIFA World Player of the Year, and in 2004 Pelé named him in the FIFA 100 list of the world’s greatest living players. Figo is one of the few football players to have played for both Spanish rival clubs Barcelona and Real Madrid. His controversial transfer in 2000 from Barcelona to bitter rivals Real Madrid set a world record fee of €62 million.

The only child of António Caeiro Figo and Maria Joana Pestana Madeira who moved from Alentejo to Lisbon in the early 1970s, Figo grew up in the working-class district of Cova da Piedade, Almada. He began his career as a street footballer at U.F.C. Os Pastilhas, before joining the academy of Sporting Clube de Portugal at the age of 11.

Figo is regarded as one of the greatest players of his generation, and one of the greatest Portuguese players of all time. At his physical peak, Figo was a quick, elegant, highly skilful player with a dribbling ability that allowed him to frequently take on and beat defenders in one on one situations.He would often employ feints to beat opponents, such as stepovers. Figo was usually deployed as a winger in his early career, where he was capable of providing several assists,due to his ability to provide curling crosses to teammates from the flank,or cut inside, link-up with midfielders, and create goalscoring opportunities. He has made the second most assists in La Liga history behind Lionel Messi.

As he lost pace and mobility with age as his career advanced, he was deployed in a playmaking role as an attacking midfielder, in particular during his time with Inter, where he excelled with his vision and varied passing ability. Although he primarily served as a creative player, he was also capable of contributing offensively with goals due to his powerful striking ability from distance,as well as his accuracy from free-kicks and penalties. In addition to his football ability, Figo was also highly regarded for his leadership throughout his career.

Figo on stage at the Web Summit in November 2016

Figo has appeared in commercials for the sportswear company Nike In 1996, he starred in a Nike commercial titled “Good vs Evil” in a gladiatorial game set in a Roman amphitheatre. Appearing alongside football players from around the world, including Ronaldo, Paolo Maldini, Eric Cantona, Patrick Kluivert and Jorge Campos, they defend “the beautiful game” against a team of demonic warriors, before it culminates with Cantona striking the ball and destroying evil.

In a global Nike advertising campaign in the run-up to the 2002 World Cup in Korea and Japan, Figo starred in a “Secret Tournament” commercial (branded by Nike as “Scorpion KO”) directed by Terry Gilliam, appearing alongside football players such as Thierry Henry, Ronaldinho, Francesco Totti, Roberto Carlos and Japanese star Hidetoshi Nakata, with former player Eric Cantona the tournament “referee.”

Figo features in EA Sports’ FIFA video game series; he was named in the Ultimate Team Legends in FIFA 14. In 2015, the arcade game company Konami announced that Figo would feature in their football video game Pro Evolution Soccer 2016 as one of the new myClub Legends. In 2018, Figo was added as an icon to the Ultimate Team in FIFA 19.

He has also taken part in several Iranian television shows such as Navad TV during the 2018 World Cup draw, together with Hamid Estili and former Hamburg player Mehdi Mahdavikia.

On 28 January 2015, Figo announced his intention to run against incumbent Sepp Blatter for the position of FIFA president.His endorsers included José Mourinho and David Beckham.In his manifesto, Figo mentioned his support for expanding the World Cup to 48-team finals tournaments, and promised greater investment in grassroots football and national federations. Considered an outsider compared to Blatter and the other two candidates – Michael van Praag and Prince Ali of Jordan – Figo withdrew from the election campaign on 21 May, stating that he did not want to be given “absolute power.” 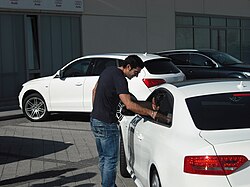 Figo is married to Swedish model Helen Svedin. They have three daughters – Daniela (born in March 1999), Martina (born in April 2002), and Stella (born 9 December 2004). They have a house in the countryside outside Sollefteå, Sweden.

Along with his countryman, former Portugal national team manager and former youth team coach Carlos Queiroz, Figo was briefly joint seat holder for A1 Team Portugal, in A1 Grand Prix, during the 2005–06 season. He now owns an upscale bar in the Algarve region of Portugal.

Figo is the founder of Network90, a private members’ networking site for the Professional Football Industry. Figo is fluent in five languages: Portuguese, Spanish, English, Italian and French.