Kylian Mbappé Lottin (French pronunciation: ​[kiljan (ə)mbape]; born 20 December 1998) is a French professional footballerwho plays as a forward for Ligue 1 club Paris Saint-Germain and the France national team. At the age of 19, he has been labelled the best young player in the world, and has been projected as the future best player in the world.

Mbappé came into prominence at an early age, starring for the youth academy at Bondy before gaining a move to Monaco, where he made his professional debut in 2015, aged 16. Mbappé then quickly established himself as a regular goalscorer for the first team in the 2016–17 season, as he helped the club gain their first Ligue 1 title in seventeen years. A year later, he transferred to Paris Saint-Germain for €180 million, making him the most expensive teenager, and the world’s second-most expensive player. In his debut season in the French capital, Mbappé featured heavily as the club captured a domestic treble of Ligue 1, Coupe de France, and Coupe de la Ligue.

Mbappé made his senior debut for France in 2017. At the 2018 FIFA World Cup, Mbappé became the youngest French player to score at a World Cup and became the second teenager, after Pelé, to score in a World Cup Final. He finished as the joint second-highest goalscorer as France won the tournament, and received the Best Young Player Award for his performances.

Mbappé was born in Paris, France.His father, Wilfried Mbappé, is from Cameroon, and, as well as being his agent, is a football coach, while his mother, Fayza Lamari, is of Algerian origin and is a former handball player.He has a younger brother, Ethan Mbappé, who plays for PSG under-12s.His adoptive brother, Jirès Kembo Ekoko, is also a professional football player. Growing up, his idol was Cristiano Ronaldo, a player he looked to emulate. 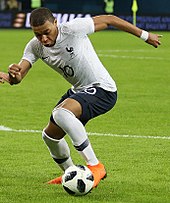 Mbappé capped a fine debut senior season at Monaco by scoring five times for France as they won the 2016 UEFA European Under-19 Championship, the striker almost single-handedly securing their spot in the final with a sparkling performance in their 3–1 victory against Portugal in the semi-finals.

Mbappé was called up to the senior France squad for the first time to face Luxembourg and Spain in March 2017. He made his debut on 25 March 2017 against the former, coming on for Dimitri Payet in the 78th minute of a 3–1 2018 FIFA World Cup qualification away win. In doing so, he became the second youngest player (only behind Maryan Wisnieski) to ever feature for France at 18 years, three months and five days old.On 31 August 2017, Mbappé scored his first senior international goal in a 2018 World Cup qualification match against the Netherlands. He scored twice against Russia in a friendly in March 2018. 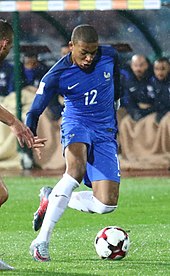 Mbappé has been described by Arsène Wenger as a “huge football talent” who “has similarities to Thierry Henry”.His talent and precocious performances for France at the 2018 World Cup also led him to be compared to Pelé in the media. A versatile forward, Mbappé often plays as a winger, and is capable of playing on either flank, due to his ability with either foot. He is capable of cutting into the centre onto his stronger right foot from the left wing, and is also capable of creating chances and providing assists for teammates from the right due to his vision. He is also able to play in the centre as a main striker, due to his composure, clinical finishing, and eye for goal.A highly skilful player, Mbappé is also known for his excellent dribbling ability, as well as his explosive acceleration, agility, quick feet, and creativity when in possession of the ball, as demonstrated by his use of elaborate feints, such as step overs, or sudden changes of pace or direction to beat opponents in one on one situations. In spite of his tall lean frame, he is also an athletic player, gifted with physical strength.

In addition to his technical skills, Mbappé is also highly regarded for his outstanding pace and close ball control when dribbling at speed, as well as his intelligent movement and ability to beat the defensive line by making attacking runs into space both on and off the ball; his ability to time his runs enables him to stretch opposing defences, and also make him a dangerous offensive threat on counter-attacks.Regarding Mbappé’s ability to run at defences, former France international Nicolas Anelka stated, “He reminds me of Ronaldo of the 1996 Olympics. He has the characteristics of a world-class player and he must manage them properly. If he follows Ronaldo’s career, ‘O Phenomenon’, he will be one of the legends that has made history in the sport.”When Stefan de Vrij, central defender for Inter Milan and the Netherlands, was asked of his toughest opponent, de Vrij placed Mbappé ahead of anyone else, including Mbappé’s childhood hero Cristiano Ronaldo.

Mbappé has a sponsorship deal with sportswear and equipment supplier Nike. In 2017, his prodigious talent saw Nike launch his own personalized football boots at age 18, the Kylian Mbappé Nike Hypervenom 3. In 2018, he unveiled the Nike Mercurial Superfly VI boots which were inspired by the R9 Mercurial boots of former Brazilian striker Ronaldo.

Mbappé features in EA Sports’ FIFA video game series: on FIFA 18 he had the highest potential rating of 94.His trademark goal celebration – posing with his arms folded and hands tucked under his armpits – was inspired by his younger brother Ethan who would celebrate in this manner when beating Kylian at FIFA. The celebration appears in FIFA 19.

On 22 February 2018, Mbappé was joined by two of Africa’s greatest strikers, former AC Milan forward and current Liberia President George Weah, and former Chelsea forward Didier Drogba, in a meeting with French President Emmanuel Macron and FIFA president Gianni Infantino at the Élysée Palace in Paris that focused on a sports development project in Africa. Mbappé stated that the development of African sport is important to him due to his parents’ African origins. 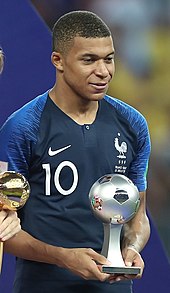