John George Terry (born 7 December 1980) is an English football coach and former professional footballer who played as a centre-back. He was previously captain of Chelsea and the England national football team. He is assistant coach at Aston Villa.

A strong, tenacious, commanding and physical defender, Terry excelled in the air and was known for his aggressive tackling, positioning, leadership and his ability to read the game. he is considered to be one of the greatest central defenders of his generation. Terry was named UEFA Club Defender of the Year in 2005, 2008 and 2009,PFA Players’ Player of the Year in 2005, and was included in the FIFPro World XI for five consecutive seasons, from 2005 to 2009.He was also named in the all-star squad for the 2006 FIFA World Cup, the only English player to make the team.

Terry is Chelsea’s most successful captain, having led them to five Premier League titles, four FA Cups, three League Cups, one UEFA Europa League and one UEFA Champions League title since 2004. He is one of five players to have made over 500 appearances for Chelsea and is also the club’s all-time highest scoring defender. In 2007, he became the first captain to lift the FA Cup at the new Wembley Stadium in Chelsea’s 1–0 win over Manchester United, and also the first player to score an international goal there, scoring a header in England’s 1–1 draw with Brazil. In his final season at Chelsea in 2017, he became the first ever player to captain a team to the Premier League title on five occasions.

Terry made his England debut in June 2003 against Serbia and Montenegro, and started his first match for England on 20 August 2003 at Portman Road, Ipswich, in a friendly against Croatia. England won 3–1. His main central defensive partner had been Rio Ferdinand. He played for his country at Euro 2004, and England Manager Sven-Göran Eriksson stated that Terry was the first-choice centre-back, ahead of Sol Campbell.

In 2005 during a FIFA World Cup qualifying match against Poland, Terry wore England’s captain armband, replacing Michael Owen as captain after the latter was substituted.

He has cemented his place in the England squad by being selected for the 2006 FIFA World Cup.In a warm-up match for that tournament against Hungary on 30 May 2006, Terry scored his first goal for England, the team’s second in a 3–1 victory.Despite an injury scare in a friendlyagainst Jamaica, he recovered to play in England’s opening fixture against Paraguay, a 1–0 victory.In the next match against Trinidad and Tobago, Carlos Edwards beat England’s Paul Robinson to a cross and as Stern John bundled a header towards the goal, Terry cleared the ball off the line with an overhead kick. In the quarter-final match against Portugal, Terry played the entire match, but England lost on penalties and he was left in tears with his fellow players. Six days later, he was the only English player to be named in the tournament’s all-star squad.

On 10 August 2006, Steve McClaren named John Terry as the England captain, succeeding David Beckham. McClaren said, “Choosing a captain is one of the most important decisions a coach has to make. I’m certain I’ve got the right man in John Terry. I’m convinced he will prove to be one of the best captains England has ever had.”Terry scored a goal on his debut as the England captain, in a friendly international against Greece. This was the first goal of the match and also the first goal during McClaren’s reign as manager.However, with Terry as captain, England did not qualify for UEFA Euro 2008 – their first absence from a tournament finals since the 1994 FIFA World Cup. Midway through the qualification campaign, Terry had accepted that he would “bear full responsibility” should England fail to qualify.

On 1 June 2007, Terry became the first player in the senior England team to score an international goal at the new Wembley Stadium when he scored England’s goal from a header in the box after a free kick cross by David Beckham in a 1–1 draw with Brazil. Almost a year later, he scored a similar headed goal once again from a free kick cross by David Beckham to put England 1–0 up against the United States on 28 May 2008.

Terry was confirmed as the England captain in August, and captained England in qualifying for the 2010 FIFA World Cup.During his first match after being reinstated as the permanent England captain he was given a torrid time by Milan Baroš and was turned far too easily when Baros scored the first goal for the Czech Republic.The match ended 2–2 with Joe Cole scoring a fortunate equaliser for England in the 92nd minute of the match. He scored his first competitive England goal against Ukraine in the qualifiers for the World Cup, grabbing a late winner after earlier giving away a free kick which saw Andriy Shevchenko equalise for Ukraine.

On 5 February 2010, following allegations regarding Terry’s private life, England manager Fabio Capello announced that Terry was removed as the captain of the England team.He was replaced by fellow defender Rio Ferdinand.

At the 2010 FIFA World Cup, England started with two draws against the United States and Algeria, which received heavy criticism from the English media.

Two days after the Algeria match in a media interview, Terry hinted at dissatisfaction with Capello’s team selection and stated that the players were bored with little to do in the evenings at their training base; he also said that a clear-the-air team meeting would take place that evening.The next day, Capello responded by saying that Terry had made “a very big mistake” in challenging his authority to the media.

On 19 March 2011, Capello reinstated Terry as England captain following a long-term injury to previous captain Rio Ferdinand. On 3 February 2012, with Terry due to stand trial due to allegations that Terry had racially abused QPR’s Anton Ferdinand, the FA stripped Terry of the England captaincy for the second time. This led to Capello resigning.

Terry was named in new manager Roy Hodgson’s squad for UEFA Euro 2012 while Rio Ferdinand was left out, leading to heavy speculation that this was to avoid potential conflict due to Terry’s upcoming trial for racially abusing Ferdinand’s brother Anton. Terry played 90 minutes in all four of England’s matches at the Euros.

Terry announced on 23 September 2012 he had retired from international football.

On the UK version of Pro Evolution Soccer 6, he appears on the front cover with Brazil international Adriano. 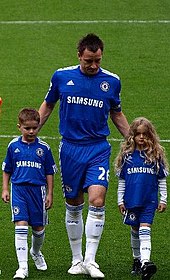 Terry (centre) with children mascots in 2009

He Is married to Toni (née Poole).In 2009, Terry was named “Dad of the Year” after he came top of a poll of UK adults in a Daddies Sauce survey.

Terry was a Manchester United supporter growing up.

Terry is one of a very small group of footballers to have been paid more than £1 million for their autobiography.His deal with publisher HarperCollins was negotiated in 2004 by Chris Nathaniel of NVA Management.

In 2016, Terry paid the £1,600 funeral costs for an eight-year-old Chelsea fan with leukemia who died from an unsuccessful bone marrow transplantation. 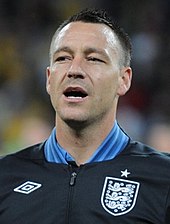 Terry lining up for England in 2012 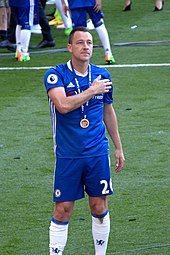 Terry after winning the 2016–17 Premier League with Chelsea