Caitlin Marie Doughty (born August 19, 1984) is an American mortician, author, blogger, and YouTube personality known for advocating death acceptance and the reform of Western funeral industry practices. She is the creator of the Web series “Ask a Mortician”, founder of The Order of the Good Death, and author of two bestselling books, Smoke Gets in Your Eyes & Other Lessons from the Crematory in 2014, and From Here to Eternity; Traveling the World to Find the Good Death in 2017, both published by W.W. Norton and Company.

Doughty grew up in Oahu, Hawaii, where she had no exposure to death until, at age 8, she witnessed another child fall to her death from a balcony at a shopping mall. She was quickly taken from the scene of the accident and it was never spoken of again. For several years, she became obsessed with fears of her own or her family’s deaths.Doughty says she could have recovered better from the incident if she had been given the opportunity to face the reality of the child’s death.

Doughty attended St. Andrew’s Priory School, a private Episcopal all-girls college prep school in Honolulu. In college she majored in medieval history at the University of Chicago, focusing on death and culture. She studied the European witch trials in the early modern period, and directed a play she had written based on the works of Edgar Allan Poe and the Christina Rossetti poem “Goblin Market”.

Early career in the death industry 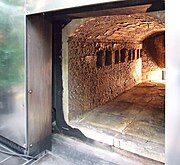 Furnace chamber of a retort or crematory

After graduation and moving to San Francisco in 2006, at age 22, she sought hands-on exposure to modern death practices in funeral homes, and after seeking employment for six months, was hired in the crematory of Pacific Interment (called Westwind Cremation & Burial in her book) despite her lack of any experience in the funeral industry. Pacific Interment could be called “the anti-Forest Lawn”, referring to what Doughty sees as the theme-park-like, kitschy corporate funeral behemoth that much of modern American funeral practice is modeled on. She picked up corpses from homes and hospitals in a van, prepared them for viewings, cremated them, and delivered the cremains to the families. Dealing with bureaucracy, such as acquiring death certificates or obtaining the release of a body from the coroner, occupied much of her work. Her boss and coworkers at Pacific Interment often tested her with very hands-on assignments, as on her first day at work she had to shave a corpse, and Doughty unflappably accepted any task, a willing jack-of-all-trades, eager to prove her mettle.

From Here to Eternity

Doughty’s second book, From Here to Eternity: Traveling the World to Find the Good Death, illustrated by Landis Blair, chronicles her travels to see first hand death customs in Mexico, Indonesia, Japan, Spain, Bolivia, and, in the US, an open air funeral pyre and a body farm. Published in October, 2017, the book reached #7 on the LA Times Bestseller list and #9 on the New York Times list.

The Order of the Good Death

Doughty is the founder of “The Order of the Good Death” an inclusive community of funeral industry professionals, academics, as well as artists who advocate for and make possible, a more death informed society. “The Order of the Good Death” is presented to the public as a website that shares articles and information by prominent figures in the death industry that make individuals more informed about the inevitable conclusion of one’s life. In previous years the public had an engagement with the cemetery as a community place, which people do not have anymore. The Order of the Good Death is Doughty’s way of creating a community while teaching individuals to accept death .Doughty’s work has a strong focus on ways of “making death a part of one’s life”. “If Doughty and the Order’s death-care revolution is successful, Americans will be more comfortable contemplating mortality and dying— thus preparing for it, seriously considering alternatives such as green burial, composting, and using crematoriums that have carbon-offset policies”.