Andy McKee (born April 4, 1979 in Topeka, Kansas) is an American fingerstyle guitar player who has released five albums and been the subject of YouTube videos, garnering over 100 million views.

McKee played his first guitar, an Aria nylon string bought by his father, at age 13. Initially underwhelmed by his guitar lessons, McKee began teaching himself how to play guitar. He began learning shred guitar music, including songs by Metallica, Eric Johnson, and Joe Satriani. McKee’s electric guitar-playing cousin inspired him to continue learning, taking him out for his 16th birthday to see a guitarist named Preston Reed perform live at a clinic. McKee later bought an instructional videotape from Reed and began to learn many of his acoustic guitar techniques from it. Later that year, with his mother’s permission, he obtained his GED in order to quit attending high school and play more guitar. He began to be influenced by guitarists such as Michael Hedges, Billy McLaughlin, Pat Kirtley, and from Passion Session by Don Ross, as he continued studying the instrument on his own.

In 2001, McKee independently released his first album, Nocturne. That same year, he was placed third at the National Fingerstyle Guitar Competition in Winfield, Kansas. In 2003, McKee toured in Taiwan with Jacques Stotzem, Isato Nakagawa, and Masaaki Kishibe, and earned first place in the Miscellaneous Acoustic Instrument contest of the New Jersey State Fiddling and Picking Championships with a Ron Spillers harp guitar he purchased from Stephen Bennett in 2002. The instrument can be heard in a number of his songs on later albums, such as “Into The Ocean” and “Gates of Gnomeria”. Only 1,000 copies of Nocturne were ever produced and the album is now out of circulation.

McKee released his second album, Dreamcatcher, in 2004. The album includes his cover of Toto’s “Africa” and “Theme from Schindler’s List,” as well as a harp guitar tribute to Michael Hedges entitled “The Friend I Never Met.” McKee used the title track to win the opportunity to perform with bassist Michael Manring, with whom he has since toured. He placed second in the Fingerstyle Guitar Competition of the Canadian Guitar Festival that year. The album was later re-released by McKee’s label in response to the popularity he garnered on YouTube.

McKee’s third CD, Art of Motion, was released on Candyrat Records in November 2005. Most of McKee’s YouTube performances appear on the album, along with a handful of tracks carried over from Dreamcatcher. During the early stages of McKee’s success on YouTube in late 2006 and early 2007, Art of Motion was the only album of his carried by Candyrat Records, and saw the most mainstream exposure as a result.

After his popularity due to his performances on YouTube and touring throughout much of 2007, McKee returned to the studio to record his fourth CD, The Gates of Gnomeria. The album contains six new songs, four songs which had been previously release on McKee’s Nocturne album, as well as two cover songs. McKee spent the majority of 2008 on tour throughout the world, performing with other Candyrat artists and promoting both Gates of Gnomeria and his collaborative album with Don Ross, The Thing That Came From Somewhere. He released a split DVD that same year with labelmate Antoine Dufour, each artist contributing eight songs to the disc; two of McKee’s from Gates of Gnomeria.

In between touring, and helping promote his duo guitar record with Don Ross, McKee recorded an EP of 2 re-recordings of songs from his Dreamcatcher album, and a cover song by Japanese guitarist Masaaki Kishibe. The album was released digitally only, along with videos available on iTunes that include his performance of his two compositions.

McKee announced in May 2009 that he was intending to finish touring in the second half of the year and concentrate on recording his upcoming album. He stated in July 2009 that it will most likely be titled “Joyland”, the title track of the album which originally went under the name “Music For A Vacant Amusement Park.” The song was inspired by an amusement park in Topeka, Kansas named Boyle’s Joyland that was open from 1951 to 1988. The album was completed in November 2009 and was released in iTunes on March 23, 2010, and in stores on March 30, 2010 on Razor & Tie. According to McKee, “On this album I’ve branched out a bit and included some instrumentation on a couple of songs. There’s also a new harpguitar tune and a couple of covers such as “Layover” by Michael Hedges and Tears for Fears’ “Everybody Wants to Rule the World.” The album also features a DVD full of 75 minutes worth of additional video material, including a documentary called Andy McKee: Joyland and four new performance music videos directed by Jeremy Osbern. 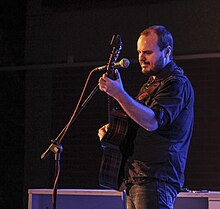 Self-described as “just this guy from Topeka, Kansas, who kind of blew up on the Internet about a week before Christmas”, McKee became one of Candyrat Records’ best-selling artists after their video of “Drifting” was promoted by users at Digg For a time, three of McKee’s videos were concurrently the three most watched on YouTube. In the wake of this exposure, he appeared by invitation on Woodsongs as well as Last Call with Carson Daly. He also contributed to Josh Groban’s 2007 Grammy-nominated Christmas album, Noël, playing guitar on the song “Little Drummer Boy”. Groban’s album went on to become the best-selling CD of 2007 in the U.S., hitting #1 on the U.S. Billboard200.

In 2012, McKee played alongside Prince on his Welcome 2 Australia tour. He played with Prince’s band during the concert on Purple Rain, Sometimes It Snows in April, Mountains, Dance Electric, and Love, Thy Will Be Done. He also kicked off the Melbourne concert with Ebon Coast, Drifting, and The Friend I Never met.

McKee has used the following equipment:

McKee began listening to metal, such as Dream Theater, at an early age. He described on Woodsongs how he was a “metal freak” during childhood, even performing a Metallica song in his high school talent show. It was not until he saw Preston Reed that his influences began to shift towards acoustic songwriters such as Don Ross and Michael Hedges. Both walks of music continue to influence him, though he has stuck with acoustic music in his professional life.

An integral part of McKee’s style of guitar playing is the use of alternate and open tunings, often combined with a regular and/or a banjo capo.

Wo Is Nancy Momoland Trending On Tiktok